The Absurdity of the "100 Percent Renewable Claim" 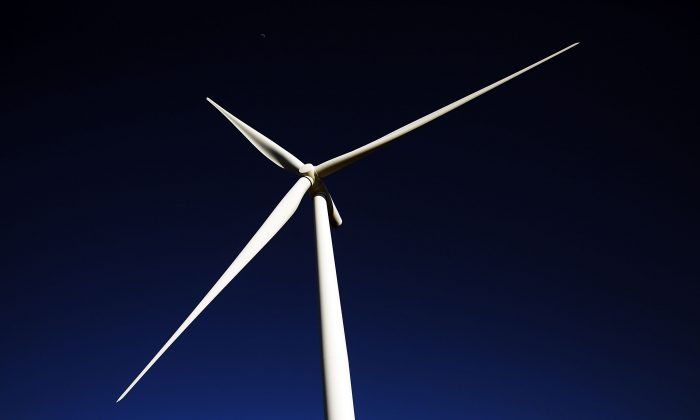 A wind turbine at a wind farm in Taft, Texas. Renewable energy sources contribute to electricity production in the United States, but unless you live next to the wind or solar farm, the actual power you use is likely to have been generated by coal, gas, or nuclear power plants. (Spencer Platt/Getty Images)
VIEWPOINTS

If a unit of government or an organization wants to establish their “green” bona fides these days, claiming to use 100 percent renewable energy is a great way to do it. While such claims might have some relevance in terms of economics, I’m not aware of any case where that assertion is technically true.

The difference is important, so let’s take a closer look at a community and a company that claim to run on 100 percent renewable energy.

Georgetown, Texas, a community of 54,000-plus located about 30 miles north of Austin, claims it has switched over to 100 percent renewable energy as of 2018, specifically power that’s generated by wind and solar. That sounds wonderful. How could this possibly be when we know there are times when the wind doesn’t blow and when the sun doesn’t shine? (The latter being scientifically known as “night.”)

The truth of the matter is that Georgetown is paying for capacity, not for actual electrons generated by solar or wind farms. Electrons run “downhill.” That is, that they naturally flow toward the nearest demand.

The city says that it’s purchasing power from the Spinning Spur 3 wind farm and the NRG Energy Buckthorn solar farm. Spinning Spur 3 is a wind farm rated at 194 MW located in the Texas Panhandle, about 500 miles from Georgetown. The NRG Energy solar farm is a massive solar array rated at 202 MW located in West Texas, about 300 miles from Georgetown.

There’s hydroelectric generating capacity totaling around 200 MW within a 50-mile radius of Georgetown. Because one can’t change the laws of physics, I think the chances that anyone in the city of Georgetown has ever consumed as much as a watt of electricity actually generated by wind power or solar power is slim to none.

Georgetown is, rather, paying their providers for the power those providers are able to throw onto the grid, not for the electrons the good people of Georgetown actually use. Is the distinction important? I rather think so.

Saying that a community or organization is 100 percent powered by renewable energy creates the false impression that it is technically feasible to do so.

“Look at us! We’re 100 percent renewable! Why aren’t you?!” It’s a disingenuous form of virtue-signaling that surely fools many people.

According to Energy Information Administration (EIA) data, Texas generated a little less than 16 percent of the electricity consumed in the state from wind-powered and solar sources. That’s substantially better than the national average of a little over 9 percent from those two sources, which is likely more a reflection of the Texas climate than the long-term potential for wind and solar power.

Georgetown also claims that it’s “unlikely” that wind and solar wouldn’t be simultaneously available. This is easy to check. The EIA keeps statistics on such things.

In the energy sector, we refer to how much energy a facility generates versus how much it is theoretically capable of producing as “capacity factor.” You can think of it as a measure of how often the plant is in operation (since running a plant at reduced load—and particularly a wind or solar plant at reduced load—is very unprofitable). Capacity factors for nuclear power plants typically exceed 90 percent. For coal and natural gas-fired base load plants, capacity factors are typically around 80 percent.

Depending on the area of the country you are in, wind capacity factors generally run between 20 to 40 percent. Spinning Spur 3 is typically at or slightly above that upper limit. That’s terrific, but it also means that Spinning Spur 3 doesn’t generate electricity for more than half the time. This is why, despite all the good intentions in the world, you can’t run a grid solely on wind.

Solar capacity factors are even worse, particularly in the winter months, running from less than 10 percent to a maximum of about 35 percent, depending on the area and time of the year.

Making an analogous claim, a public relations firm representing Starbucks issued a press release on Nov. 29 that claimed that “more than 340 Starbucks stores across Illinois—including the future Chicago Roastery—will be powered by 100 percent renewable wind energy.”

For all of the reasons described in the Georgetown case, while Starbucks may be purchasing the equivalent amount of wind capacity, the vast majority of the electrons its stores use are, and will continue to be, produced by fossil-fuel and nuclear-fired sources.

In fact, wind and solar represent a little over 9 percent of the power produced in Illinois last year. Given my home state’s weather and geography, that’s unlikely to climb much in the years to come, no matter how much people wish it could be so.

Richard Trzupek is a chemist and environmental consultant, as well as an analyst at The Heartland Institute. He is also the author of “Regulators Gone Wild: How the EPA Is Ruining American Industry.”

Seems that 'virtue signaling' is the new add campaign for the left. I'm sick and tired of the phony Amazon add where they make the ludicrous claim of 100% zero carbon emissions, when in fact they are just pushing the carbon creation off onto other entities. Smug arrogant but a total fraud, all for those that are uninformed!

Electricity moves at near the speed of light, on bare wires, as electro-magnetic waves, about 1800 miles in 0.01 second.

The electrons move at about 1 inch/second, and essentially vibrate in place at 60 cycles per second.

The output of any generator spreads out almost instantaneously all over the Texas grid.

The town decided to have a paper power purchase agreement with a producer of unreliable wind and solar electricity, likely at a higher price than the wholesale grid price.

The town DRAWS electricity from the grid, which carries a mixture of ALL generators.