If the thermostats in the buildings connected to a boiler are set so the buildings can use the entire hot water output of a boiler, at say 110F, that’s as hot as the water temperature leaving the boiler will get. It doesn’t need to increase, and won’t, even if the boiler’s high limit controller was set to 140F, 180F, or 220F. The conditions for thermal equilibrium are achieved at a supply water temperature of 110F, thus the first law of thermodynamics is satisfied. End of story.

The condensate of natural gas and propane boilers primarily would be water. However, several other chemical compounds would make the condensate acidic with a pH of about 4.0

The condensate would corrode ferrous metals and copper. It would chemically eat away at the boiler’s heat exchanger as well as the inside of the vent connector. Figure 1 of URL shows the results after only one year of operation.

The presence or absence of sustained flue gas condensation is determined by the temperature of the water entering the boiler and the air/fuel ratio at which combustion occurs. Of these, only the boiler inlet water temperature is easily controllable. 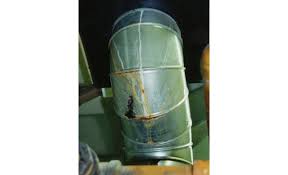 Several decades ago, sustained flue gas condensation was seldom a problem. Boilers would send out hot water at 180F - 200F

During a cold-start, a small amount of flue gas condensation would form within the boiler. However, the operating conditions would quickly increase the water temperature entering the boiler above the dewpoint and any condensate would quickly evaporate. This situation occurs in every boiler during a cold start and is generally not a problem.

When radiant-panel heating made its comeback in North America in the 1980s, conventional boilers were paired with low-temperature distribution systems, i.e., sustained flue gas condensation on the outside of the boiler tubes, which rapidly caused erosion and leaks. Fortunately, there are ways to avoid such condensation.

If this requires the boiler to operate well below the dewpoint of its flue gases — so be it. Thermodynamics doesn’t care if the boiler is condensing; it only cares about balancing heat extraction with heat production.

The mixing assembly protects the boiler by reducing heat extraction from the boiler to the distribution system, whenever the boiler temperature decreases below a specified minimum operating temperature.

This protection partially unloads the boiler from the distribution system, allowing the boiler temperature to quickly increase above condensing conditions. This action lifts the combustion side of the boiler’s heat exchanger (the outside of the tubes) above the dewpoint of the flue gases.

Figures 2, 3, and 4 of the URL illustrate situations in which a conventional boiler is, and is not, protected from flue gas condensation. These systems all use a three-way mixing valve to control the temperature of the water to the distribution system. In each case, the controller operating the mixing valve is set to supply hot water at up to 125F to the heating zones.

The manifold station in each system serves six heating zones with radiant panels, each being 300 feet of ½-inch PEX tubing embedded at 12-inch spacing in a 4-inch-thick concrete slab, which would be insulated only at the bottom surface to ensure heat would travel upwards.

The systems each have a conventional boiler with a rated output of 50,000 Btu/h, sufficient for an average 2000 sq ft house in New England on a cold winter day.

System of Figure 2: The system in Figure 2 does not measure boiler inlet temperature. The water temperatures shown are those required based on a thermodynamic heat balance with the boiler in continuous operation, i.e., heat extraction equals heat production. In this case, the distribution system requires water at 5.5 gpm at 111.4F to supply 50,000 Btu/h.

Because the mixing valve controller is trying to achieve a supply water temperature of 125F and only has water at 111.4F available from the boiler, the hot port of the mixing valve is fully open and the cool port completely shut. Hence, the mixing valve is simply passing through the entering water stream directly to the manifold station. No mixing occurs.

All water exiting the return manifold flows directly back to the boiler at 93F. This low temperature would cause sustained flue gas condensation within the boiler. 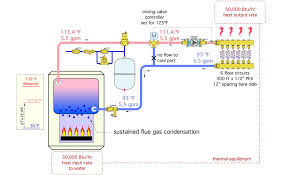 The manifold station still requires 5.5 gpm at 111.4F and returns the same flow at 93F to supply the 50,000 Btu/h added to the water by the boiler. The hot port of the mixing valve is again fully open and passing all entering hot water directly to the manifold station. No mixing occurs.

The bypass circulator and boiler loop create a second mixing point within the lower of the two closely spaced tees. The mixing at this location slightly boosts boiler inlet temperature, but not enough to prevent sustained flue gas condensation within the boiler. 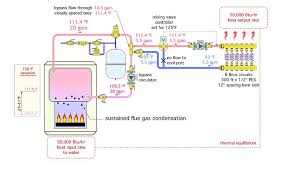 System of Figure 4: The missing element is a mixing system that senses and reacts to the boiler inlet temperature. It would enable the boiler to be operated at higher inlet and outlet water temperatures, thereby avoiding any flue gas condensation.

The water entering the boiler would be 20 gpm at 130F, and its outlet temperature would be 135.4F for an increase of only be 5.4F.

The system stabilizes at the conditions shown in figure 4; the heating zones are supplied with water at 111.4F and release heat at 50,000 Btu/h, and the boiler inlet temperature remains at the mixing valve controller’s set minimum value of 130F.

A thermodynamic balance between the boiler and distribution system is achieved, and the boiler inlet temperature is high enough to avoid flue gas condensation.

The key to the successful strategy shown in Figure 4 is a mixing assembly that senses and reacts to boiler inlet temperature. This detail was lacking in the systems shown in Figures 2 and 3. 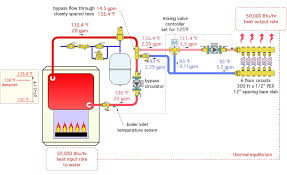 Alternative Mixing Methods:The systems shown in Figure 4 uses a motorized three-way valve as the main component of the mixing assembly. Alternatives to this mixing method include:

When properly applied, these mixing assemblies also can protect a conventional boiler against flue gas condensation.

Biomass Fuel Boilers: Boilers burning cordwood, wood chips, and wood pellets are used to supply low-temperature distribution systems. These biomass fuel boilers require protection against sustained flue gas condensation and can be equipped with the same type of hardware to provide that protection.

However, the flue gases of such biomass boilers contain vastly more chemical pollutants and particulates than propane and natural gas boilers. Those chemical pollutants and particulates would deposit on the outside of the boiler tubes, thereby reducing heat transfer from the flue gases to the hot water. Periodic cleaning would be required during a heating season, which would increase the operating and maintenance costs of biomass fuel boilers.

Here are some results of PM and efficiency testing of various heating units, using various fuels, performed by engineers of the Brookhaven National Laboratory and the EPA.

PM Tests: The PM emissions were based on MJ of fuel input. The results of the tests were:

- Pellet units have PM emissions of 25 mg/MJ; even the cleanest ones in 2020 would be off the charts dirtier than all fuel oil and gas units.

NOTE: Cordwood stoves were not tested.

Older cord wood stoves have about 5 times the PM and PAH of EPA-certified pellet stoves.