Remember folks,the modus operandi and "business plan" of wind companies has not changed in Maine since the inception of PL-661 in 2008 (Expedited Wind Law).

The law was designed by big wind and numerous self-serving unctuous politicians (think Angus King)  and  deceptive "enviro"lawyers  to destroy Mainers' constitutional  and  property rights and to enable their scheme. Other ignorant or ill-informed politicians at the time "assumed" the benefits of Industrial Wind (there has never been a cost/benefit analysis done of grid scale wind in Maine by the DEP or other agencies). Why?

They use base tactics in addition to their financial  and political clout to defeat all citizen efforts to defend themselves.

Consider the words collusion, corruption, bribery and  self-serving interests of the few over the rights of the many.

"Corporate Environmental" groups like NRCM ,Audubon and Sierra Club get large "donations" to support the project.

Dreams of shiny new fire engines and police cars are dangled in front of financially strapped poor rural towns . Selectmen are enticed by "favors" to prevent citizen initiated local protective anti-wind ordinances and moratoriums in the affected towns that can modify, delay or defeat a project . Officials  are told the "presumed  benefits" of the industrial complex, but none of the serious  downsides to it.

No meetings are recorded officially by town officials in the early stages.

Naive town officials are told all information is  "proprietary" by the industrial wind company. Money can be passed under the table ,but never disclosed or recorded.

Large land owners leases are arranged and kept secret from the public.

No emails are sent (no  Hillary email tactics are used,they are smarter than that)..

When lease time comes for the project , squelch clauses are in place that threaten the lessee to never  divulge anything about the soon to be announced project, nor oppose it .

They know the game,do you?

The Exposure of the Truth of Industrial Wind Methodologies is a must!

The Exposure of the truth is their Achilles heel......

It is the "Which Wheel Gets the Grease" syndrome. At $5k (minimum) per year per turbine, stated in an WEA document, I can see their interest. $100K+ (each) over 20 years, Plus any Impact settlements for the remaining property. Access fees and other negotiated items.

According to Maine's Attorney General, we have to expect and accept a certain level of conflict of interest because 1) Maine has so few people, and 2) these are part-time legislators. Until Maine gets an Attorney General who respects the LAW, there is little hope.

Case in point: House District 141 Representative Beth Turner (R-Burlington) was opposed to the Passadumkeag Wind project on scenic grounds. At the same time she supported the Bowers Wind project! She claimed she was only reflecting public sentiment. How can that be, you ask? Could it be because her family (Haynes) does not own any of the Passadumkeag land but does own some of the Bowers land? It's enough to make a person suspicious.

Not sure you all are getting the picture of how it went down here in Clifton. Just some for instances, rejection of an ethics ordinance, rejection of a conflict of interest provision for town officials, etc. I was the 'Planning Assistant' tasked with writing the town's land use ordinance and I was chastised for letting it slip to neighbors of the proposed wind energy facility that such a project was being talked about. One night I left a meeting early in a huff (quarter of ten) after the Planning Board suddenly and seemingly at the spur of the moment changed the draft from a mile setback to 4000 feet. The day before the developer had called me and at least one Board member to gripe that he 'couldn't do a mile', but he 'could do 4000 feet'. And magically,  the next evening after most of the public had left assuming the one mile setback was in the draft, that Board member makes a quick motion and there's a quick vote and 4000 it's been ever since. Oh, did I mention that this was at a workshop where decisions weren't supposed to be made? Emboldened by their earlier successes, more recent Planning Board inspired amendments to the ordinance have given the town officials the 'right' to have secret meetings with developers and have enacted a choice for a developer to attain vested rights without meeting the generally recognized judicial standard for that to happen. Did I mention that one of the developers was also a selectman and was allowed to sit in executive session while the Board discussed legal alternatives and decisions regarding the wind project? Those are a few of the highlights, there are plenty more of the same nature. Try to get some fairness and just treatment in this charged atmosphere? We need competent and honest people in town government. Good luck on finding them after a developer comes to town. And darn the misfortune of having a virus wipe out computer records in the town office. Whadda the odds?

Litigation costs money. Some creative ordinances, and bills to modify the laws cost less. A Rights Based Ordinance is virtually free, seldom challenged, and if written correctly bares no expense to the community to defend. Such was Sangerville's and Parkman's against the East-West Corridor proposal. Though their methodology is not the only style of ordinance. A new ordinance may not prevent what has happened, but correctly written it can prevent renewals, or future projects. [Something to think about]

Public Meetings, Public Hearings, workshops are all fair game to recordings and photos. Executive sessions are not. But then Executive sessions must exclude all of the public, other than those specifically sought out for information. An only One at a time. Unfortunately, Associated groups have been allowed to enter together which they are not suppose to do as that can be considered collusion. Selectboards of Communities are held to that standard of law and the Committees and Legislature are suppose to be in any non-public gathering.  Also, no decisions are suppose to be made in a closed session, only deliberation. All decisions must be made in Public, which is open to recording. (This is the standard imposed by the state upon community leaders) Recording, by photo, audio or video whether a journalist or not may be covered to a degree under FOAA and FOIA as a documentation not otherwise created in the format desired by the requesting party. ( I have never been challenged that it is not covered )

Our town, Clifton, is telling us that all town emails from this year back to forever have been lost due to a virus. Feel free anyone to call the Clifton town office and ask for emails between the town and Pisgah Mountain, LLC for any date(s) you feel like. See how it goes... 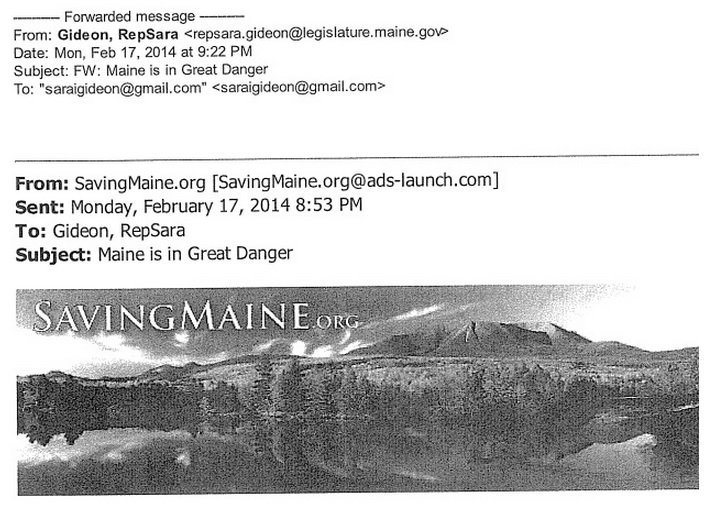 Is it true that Rep. Sara Gideon of Freeport is trying to get legislation passed so that the state's "expedited wind permitting area" can be expanded to accommodate Plum Creek? )"An Act to Amend the Laws Governing Wind Energy Development Permitting") As it stands, Plum Creek is a REIT with incredible tax avoidance advantages and now it is getting hitched to First Wind, a Yieldco and descendant of Enron. Is Ms. Gideon sponsoring such legislation so that it will give the special interests yet one more unfair advantage over the people and wildlife of Maine?

The links below will take you to 171 pages of emails sent back and forth between then Senate President Justin Alfond and the wind "industry", their lawyers, etc.