Is Biden "Certifiable", Insane That Is.


McConnell: Biden Blaming Gas Price Hike On Russia Is 'Laugh Out Loud'
Gas prices have hit record highs. The extra cash you spend on gas to fuel your car just enough to travel to and from the grocery store is even more painful. Inflation is driving up the costs of basics like beef, poultry and pork.

Rather than take action to address these issues, like cutting gas taxes and producing more oil domestically, the Biden administration and its like-minded toadies offer out-of-touch suggestions for how Americans can cope with the financial strain.

It would be foolish to dismiss this advice as merely ignorant, as if those elitist liberals chauffeured around from meeting to meeting on the Hill simply don't understand the plight of the American people.

From electric vehicles to vegetarianism, the advice is intentional. It's about promoting Green New Deal-style policies.

Democrats meet complaints about gas prices with suggestions to buy electric vehicles or take a bus. Green New Deal advocates want zero-emission transportation modes "as much as is technologically feasible." It's why the administration is committed to clean transportation, even if it helps China or increases our debt.

Struggling with the cost of filling up your Honda Accord or Ford F-Series pickup? Democrats suggest you trade it in for a more expensive electric vehicle—with a battery made in China, which owns that market. Never mind that the cost of electricity is skyrocketing, with New York City alone seeing a 28.2 percent increase, or that new cars have been pummeled by inflation.

If you're worried about where you'll plug in for long drives from Duluth, Minnesota, or Plano, Texas, or Pocatello, Idaho, you'll be covered. The Biden administration is spending billions for up to 500,000 charging stations nationwide. When and where will they be installed? Who knows. But Green New Deal advocates have repeatedly said we must start this infrastructure Now.

But good luck finding an electric vehicle even if you're ready to make the purchase: they're also victims of the supply-chain crisis the Biden administration claimed wasn't real (before claiming to have solved it).

You'll just have to understand that the comforts you took for granted while driving—like basic safety—do not extend to your new mode of transportation. 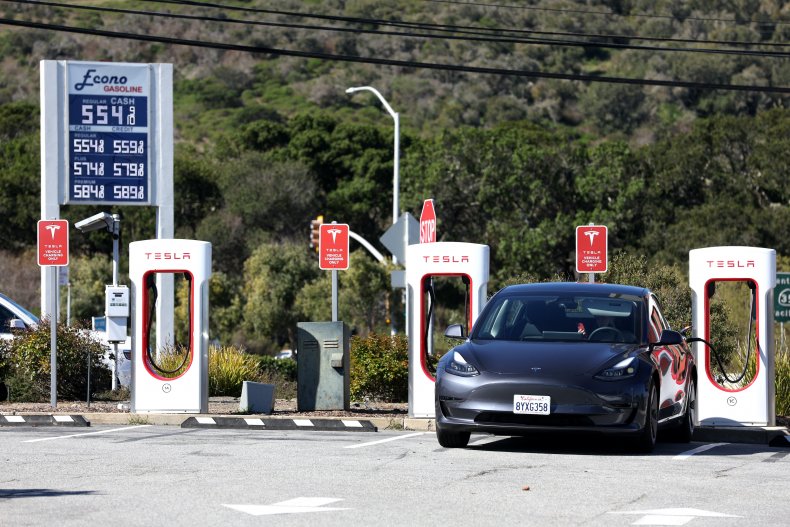 SAN BRUNO, CALIFORNIA - MARCH 10: A Tesla car recharges its battery at a Supercharger on March 10, 2022 in San Bruno, California. With oil prices continuing to soar, shares for companies in the electric vehicle sector are rising as consumers look to trade their gas powered cars in for electric vehicles.JUSTIN SULLIVAN/GETTY IMAGES

In Seattle, riding the bus comes with a contact high or broken clavicle.

Fare enforcement used to keep the homeless off public transportation, but Seattle's woke progressive leadership declared it racist. Since then, homeless addicts have taken over. Bus drivers filed a historically high number of complaints about homeless addicts using narcotics like fentanyl, meth and heroin on their coaches.

The subway system may be a viable alternative to the bus for New Yorkers. It's just unfortunate that Democratic politicians made arming yourself so difficult; you'll need the protection.

There's been a surge in crime in NYC's subway systems, where prolific offenders are taking advantage of the city's light-on-crime policies and judges who won't punish. There's been a surge of violent crimes plaguing the city's underground transit system and city leaders have struggled to get it under control.

If you live in middle America or are a single parent, you may not have a viable option for public transportation. It seems untenable for Democrats to claim they're the party of the working class when they don't understand the struggle of taking a bus to travel between two jobs across town or taking your kids to soccer practice. It's why, when it comes to the Green New Deal, these struggles are simply ignored.

"Though your palate may not be used to it, tasty meat substitutes include vegetables (where prices are up a little over 4%, or lentils and beans, which are up about 9%). Plan to cut out the middle creature and consume plants directly. It's a more efficient, healthier and cheaper way to get calories," she wrote.

This obviously isn't reasonable or even wise advice—meat-eaters are healthier by some measures than vegetarians. And in my experience, carnivores are also much happier than vegetarians. Lack of a juicy steak or burger would make anyone unhappy. But the advice to eat lentils instead of burgers aligns with the Green New Deal.

One of the most maligned Green New Deal concepts was its attempt to address "farting cows" and factory farming's contributions to methane production. The policy's chief champion, Rep. Alexandria Ocasio-Cortez (D-N.Y.), suggested you eat less meat, which was picked up by militant vegan organizations arguing the policy had better address meat consumption.

There's no doubt Biden administration officials and left-wing talking heads are out of touch. Frankly, politicians on both sides of the aisle have gotten used to other people serving them, driving them from meeting to meeting and catering their meals. Wealth and power will do that.

But when their advice happens to match what Green New Deal evangelists were preaching, perhaps it shouldn't be written off. It's likely intentional. And it makes the claim that Vladimir Putin, Big Oil or meat producers are responsible for price hikes especially absurd.

Jason Rantz is a frequent guest on Fox News and is the host of the Jason Rantz Show on KTTH Seattle, heard weekday afternoons. You can subscribe to his podcast here and follow him on Twitter: @jasonrantz.