Germany, a major industrial country, is a leader in renewable energy generation. However, Germany made a significant mistake. Germany decided to phase out its nuclear plants, which produce low-cost electricity that has near-zero CO2/kWh, instead of replacing the plants. Germany continued to the use of lignite, a soft coal (low-Btu/lb.) coal, and hard coal. As a result, the CO2eq emissions have not decreased for the past 8 years.

Germany is headed for a clear failure to meet its 2020 and 2030 CO2eq reduction targets, according to calculations by the country’s environment ministry. Without further action, Germany’s CO2eq emissions will only be 31.7% to 32.5% below 1990 levels, an internal environment ministry paper seen by the Clean Energy Wire shows.

Given the official target of reducing CO2eq by 40%, the ministry warns that a failure of this magnitude would constitute a “significant blow to Germany’s climate policy”, and would amount to “a disaster for Germany’s international reputation as a climate leader”.

German Electricity Consumption: Germany has a goal to have 80% of its final electricity consumption (to user meters) from RE sources by 2050, per Die Energiewende. The RE goals are:

Thus, about 20% of final electricity consumption could continue to be from fossil fuels, such as natural gas, in 2050. See table 2.

Energy Conversion Flow Chart from Source to Meter: Grid operators often provide the real-time intensity of CO2eq emissions on their websites. They calculate the CO2eq/kWh and CO2eq/y for each generator, based on:

- The heat rate curve of each generator connected to the grid, which shows Btu/MWh versus percent of rated output.

- Monitoring the output fed to the grid of each generator on a real-time basis.

By summing the CO2eq of all generators, including peaking units and synchronous standby units (while in this mode they do not feed into the grid), the total grid CO2eq and grid g CO2eq/kWh, is determined for each year and published in reports. Ignored are:

1) The plant self use energy, about 4% of the energy fed to the plant.

2) The energy required for exploration, extraction, processing and transportation before the fuel is fed into the plant.

- If a grid has hydro plants with storage reservoirs there will be pumping losses; round-trip loss about 20%.

- The energy left over is transmitted and distributed and metered as medium voltage or low voltage.

- Table 2A shows the CO2eq/kWh of the various steps.

- The bold values in table 2A are directly from referenced URLs. 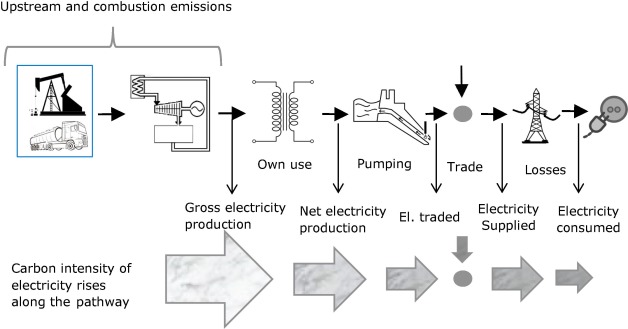 * Electric pumps pump water into upper hydro reservoirs, from which it is later discharged to hydro plants to generate electricity. That process has a round-trip pumping loss.

* Upstream includes emissions due to exploration, extraction, processing and transportation.

NOTE: Regarding plug-in hybrids and plug-in electric vehicles in Germany, CO2eq = 632 g/kWh should have been used in 2016 for analysis for only the driving CO2eq, as in this article. The embedded CO2eq is separate issue.

German Primary Energy Consumption: Germany has a goal to have 60% of its primary energy consumption from RE sources by 2050, per the Energiewende. Table 3 shows the German goals and compares them with Denmark and Vermont.

Germany Not Reaching CO2eq Goals: Germany’s CO2eq emissions (from all sources) are about the same as in 2009. As part of the Energiewende, Germany is aiming to have:

German Not Reaching Primary Energy Goals:Regarding the consumption of thermal energy for buildings, industry and commerce, and fuels for transportation, there has been so little change that the overall primary energy consumption from RE has increased to 13.1% in 2017. See goals in table 6 and URL.

NOTE: Primary energy is a lump of coal or a tank of gas; final energy is the electricity from that coal or the motive energy from that gasoline. However, no official estimate has yet been produced for final energy. The calculation is abstract; we know how much electricity was generated, but the calculation of final energy for all the heating systems around the country and for motor fuel used in the country’s more than 40 million vehicles is based on certain assumptions, such as the average efficiency of heating systems and vehicle gas mileage.

Germany Disconnecting GDP and CO2eq Emissions: Germany’s CO2eq decreased from 1252 MMt in 1990 to 1045 MMt in 2000 mainly due to closing down inefficient plants in East Germany. Germany did mange to have near constant CO2eq for 9 years during which GDP increased 3263/2460 = 32.6%, a remarkable achievement; population increased as well.

As far a nature is concerned, there was no positive achievement at all, because of the environmental damage, and damage to flora and fauna, caused by the increase in population and GDP.

US CO2 Emissions Decreased Due to Less Coal and More Natural Gas: The URL shows the unusually rapid decrease of CO2 emissions during 2015 and 2016. Such a rapid decrease likely will not occur during the next few years, as natural gas prices likely will increase due to exports, and as changes in EPA rules likely will cause fewer coal plants to close. A “cleaner” US grid would mean EVs would compare more favorable with E10 vehicles regarding emissions. The US grid is “cleaner” than the German grid, on a source energy basis. See Table 2B.

Comparison of Denmark, Vermont and Germany: Germany's goals are much less extreme than Vermont’s goal of "90% RE of all primary energy by 2050".

Germany and Denmark, both with high levels of RE electricity generation, charge most of the extra costs to household electric bills by means of various taxes, fees and surcharges. As the result, both have the highest household electric rates in Europe. France, 80% nuclear, has one of the lowest household rates, about 15 c/kWh. See table 3.

- Source energy is the energy taken from coalmines, oil and gas wells, and forests for conversion to electricity and heat.

- Primary energy = source energy - energy used for exploration, extraction, processing and transport of fuels (coal, oil, gas, biofuels, wastes, etc.) to users, such as fuel to electricity generating plants, process plants, buildings, vehicles, etc. That means it has not been subjected to any conversion or transformation process.

Denmark is in a unique situation with plentiful onshore and offshore winds, and large nearby grids to balance export excess electricity in case of stronger winds.

Vermont has no such wind uniqueness. Vermont has medium wind conditions and poor solar conditions, which means high wind and solar electricity costs/kWh, which would act as a wet blanket on the anemic, near-zero, real-growth Vermont Economy. See URLs.