This November 30, 2010 BBC Europe News source identifies Antonio Birrittella as a defected Mob boss who  is co-operating with the police and other Italian authorities.  Birrittella provides an insiders look at the Mafia's exploitation of wind energy.

The Structural Fund money is given out by the European Commission in Brussels. The EU-wide budget for Structural Funds is 350bn euros (£295bn) for the latest seven-year period (2007-2013), distributed across 650,000 programmes in 27 countries. 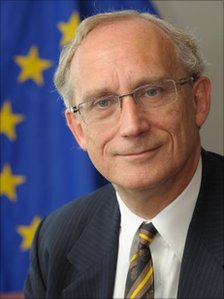 The Commission itself estimates that across the EU's 27 member stat..., which represents a 100% rise on the previous year.

On the Italian island of Sicily, one recently-defected Mafia boss revealed just how some of this money was channelled into Mafia hands.

Not wanting to be seen speaking to the BBC in public, Antonio Birrittella agreed to a meeting in a private room in a backstreet hotel in the island's capital Palermo.

"All these funds from the EU were seen as a gift to the Mafia, easy pickings, especially the development of wind farms and renewable energy," he said.

Although now co-operating with the police and other Italian authorities, Birrittella admits to being a former key player in the infamous local Mafia, the Cosa Nostra.

With previous "responsibility" for extortion in neighbouring Trapani, he claims the modern Mafia has reinvented itself as a "white collar" organisation which has siphoned off millions in EU funds, through a combination of shell companies and the infiltration of regional bodies which distribute the subsidies.

He claims to have detailed knowledge of how the scams worked:

Listen to the Programme

He says the organisation used intimidation to obtain the plots of land it needed to build the wind farms, and threatened any construction firms who refused to pay its extortion fees.

"It started with arson on their premises or building sites, burning their trucks and machinery. That was followed up with threatening phone calls. At that point they usually got what they wanted."


With Sicily due to receive a further 6.5bn euros in European structural funding over the next seven-year financial period, there is growing concern about a lack of safeguards to protect the additional money if the region's renewable energy sector continues to attract sizeable subsidies. 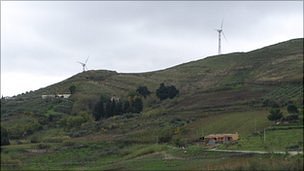 Forty kilometres (25 miles) from Palermo, the farming region of Camporeale is dominated by rows of large wind turbines which dot the surrounding volcanic ridges.

According to the regional anti-Mafia prosecutor Roberto Scarpinato, some of the wind farms here were developed by the Mafia using EU subsidies, which were then used to fund a money-laundering empire.

By rotating the millions in EU funds through different front companies, the organisations appeared to be operating legitimately and so attracted further EU grants.

"They took the same amount of money, and they moved it around as if each company had access to its own existing capital. They performed this same trick many times, and every time they received public funds," he said.

Many of the wind farms have since been sold on to genuine energy companies completely unconnected to the Mafia.

Details of the sums involved are slowly starting to emerge. The Italian authorities recently seized a record 1.5bn euros' worth..., which included 43 wind and solar energy companies.


Back in Brussels, Olaf's director general Nicholas Ilett says the structural funds do have built-in checks and balances.

Bill Newton Dunn, Liberal Democrat MEP for the East Midlands who served on the EU's Budgetary Control Committee, praises Olaf for some of its work, but complains that the "tiny and under-resourced" service has no power to prosecute when it finds evidence of fraud.

And with just 18 investigators looking at the distribution of the entire Structural Fund budget, Nicholas Ilett says the ultimate responsibility for preventing fraud lies with each member state:

"We have done a lot of detailed work on areas subject to Mafia influence, but fighting serious organised crime is not a matter for an administrative service based in Brussels, but for the police and judiciary in the country in question."

However, German MEP Inge Grassle argues the member states are themselves part of the problem:

"We have member states which actively block Olaf and have no interest in really having fraud cases detected.

"At the moment, I'm sorry to say only 7% of cases [highlighted by Olaf] are picked up by the member states. This means that 93% of cases are thrown in the paper basket.

"Therefore we have an investigation unit which is not really effective because after the investigation nothing happens. This means we tolerate criminality. I think that this is really bad news."

File on 4 was produced in conjunction with The Bureau for Investigative Journalism and is on BBC Radio 4 on Tuesday 30 November at 2000 GMT. Or listen via the BBC iPlayer or download the podcast.

More on This Story

More from Barbara Durkin on First Wind / mafia ties. Maine is open for business with shadies.

hmmmm anybody smell First Wind in the air? of course we already knew this from what we have been told before...