Do Renewable Portfolio Standards Deliver?
https://bfi.uchicago.edu/working-paper/do-renewable-portfolio-stand...
This working paper from the Energy Policy Institute at the University of Chicago finds that average retail electricity prices in states after the passage of a renewable energy mandate are 11 percent higher after seven years and 17 percent higher after a dozen years, even though the increase in renewable electricity generation is a minimal 1-4 percent

States With and Without Mandated Renewable Portfolio Standards

Here is an item of interest to many people regarding mandated RPS requirements, which require utilities to sell a certain percentage of their total electricity sales as renewables, such as wind, solar, wood burning, municipal waste burning, etc. Some states also count hydro as renewable.

States with mandated RPS requirements had electricity prices 26% higher than those without.

The 29 states with mandated RPS requirements (plus the District of Columbia) had average retail electricity prices of 11.93 c/kWh, according to the U.S. Energy Information Administration.

The 21 states without mandated RPS requirements had average retail electricity prices of only 9.38 cents/kWh.

The logical conclusion is, the more RE, the higher the electric rates, regardless of energy mix on the grid.

3) Comparison of California, US and Vermont Electricity Prices, All Sectors

It is important to understand no cost ever disappears. The key issue is allocation (a.k.a., follow the money), which often implies politics, and realizing state and federal energy policy objectives.

If California were removed, it would lower the US average. A comparison of California versus that lower US average shows California rates, all sectors, increased 28.36% and US rates (wo/California) only 5.45% during the 2010 - 2018 period.

California’s irrational/over-the-top/expensive RE efforts are demonstrating, the more highly subsidized RE, the higher the electric rates. But that is only a part of the cost picture, because not all costs end up in the rate schedules, as shown in section 1.

Vermont: The Vermont rates, all sectors, as posted by EIA, do not include the Efficiency Vermont surcharge and the Electric Assistance Program fee tacked onto electric bills by politicians to finance pseudo-social programs.

Household Electric Bill With and Without Efficiency Vermont Surcharge: The GMP energy $/kWh for “households” is significantly greater than for “all sectors”. Here are the data from my recent bills.

Germany and Denmark Household Electricity Prices: The above correlates well with this graphic, based on Eurostat data. Denmark and Germany have advanced the most along the wind and solar installation path. They have the highest household electric rates in Europe. See graphic and Appendix. 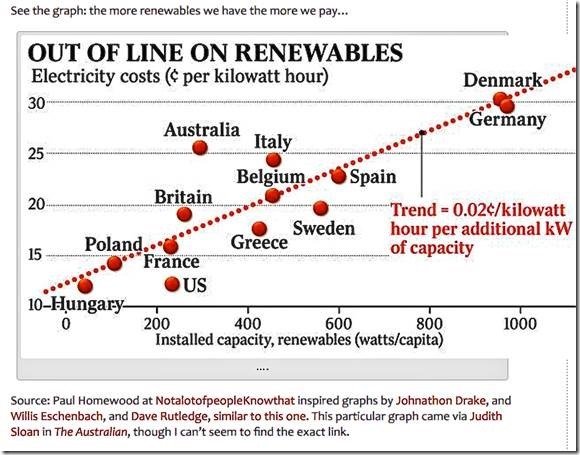 Comment by Donna Amrita Davidge on January 24, 2020 at 6:19am
Yes we know how inefficient and what a ripoff they are.. this helps support that.