A look at the fraud behind the official Covid numbers and the repercussions of lockdowns. Watch this, spread this. Remember: when the the people fear government, there's tyranny. But when the government fears people, there is liberty. When enough people stand together, united, governments will back off and resume their proper role in society.

Watch at this weblink:

America is at war with enemies foreign and domestic and resisting unlawful Government agents is lawful and constitutional
The truth about the neo-Marxist revolution now underway in America; how the Marxists are taking over many of the police departments of major American cities, the U.S. military, the courts, and state legislatures.

Article and podcast at the following weblink:

The ‘Plandemic’ and the Great Awakening

Mikki Willis’ documentary “Plandemic” was released May 4, 2020, and has since been viewed over 1 billion times, despite being universally censored. “Plandemic Part 2: Indoctornation” has also been viewed more than 200 million times
“Plandemic: Indoctornation” features David Martin, Ph.D., who has documented and tracked white collar crime for decades and invented technologies that help trace the flow of funding
Martin helped educate Sens. Ron Paul and Ron Johnson when they started to go after Dr. Anthony Fauci to finally hold him accountable for his decades of crimes
While many blame the encroaching tyranny on incompetence, the evidence suggests it’s not incompetence at all. It was planned this way
Ultimately, the plan is to create a state of dependency, through which the technocratic elite can then control the human population. “Plandemic Part 3” will delve into this plan to show the history behind it and how it has led us to where we are right now. It will also review how we can rebuild society after it falls apart 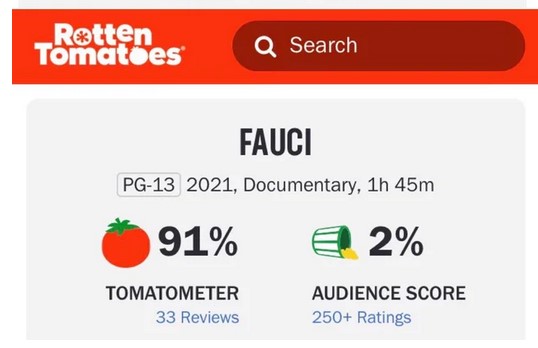 Meanwhile at Rotten Tomatoes, the 2% audience score on "Fauci" speaks volumes. (INFERENCE: Those who realize something is terribly wrong are far, far bigger than they want us to know)

CCC, a bunch of RE idiots trying to pull the wool over the eyes of innocent, gullible lay people, got caught lying and obfuscating big-time.

More low-wind days means vastly greater CAPACITY, MW, of instantly available, reliable, low-cost, traditional power plants, which must be staffed, fueled, ready to operate, in good working order, as demanded by the UK grid operator, to fill in any wind (and solar) shortfalls; the UK has LOTS OF DAYS without sun, throughout the year.

Initially, CCC was obstructing the public release of its report to THE UNRULY MOPCCC was ordered by the Court to release the report to the public.

Are you f….g kidding me?We are talking hundreds of millions of small folks spending $TRILLIONS EACH YEAR, to “save the world”, and CCC is blatantly lying about the feasibility and cost!These CCC people should be drawn and quartered.

ALL OF THIS IS AWFUL NEWS FOR THE SCOTLAND CLIMATE MEETING

BTW, every wind turbine draws significant electricity from the grid, whether it is producing or not.
2)
Great graph.

It clearly shows, the capacity’s factor of wind very often is less than 10%The average CF is about 30%.

In addition, at very low CFs, say 3 to 4%, with winds at 4 mph and less, the wind turbine is producing about as much as it is consuming, i.e., no net feed to the grid. Yikes

The RE clowns at CCC are of-the-charts fabricators of lies.

They should be drawn and quartered