Central Maine Power (CMP), a subsidiary of AVANGRID, has submitted the Maine Clean Power Connection (MCPC) in response to the request for proposals for clean energy and transmission issued in November 2015 by state agencies and utilities in Connecticut, Massachusetts and Rhode Island.

Thank you for this information, Eric Tuttle.  You're amazing.

For those of you following LD 1513, attached is the amendment provided to me by the proponents of the bill. This will be discussed at the work session tomorrow. 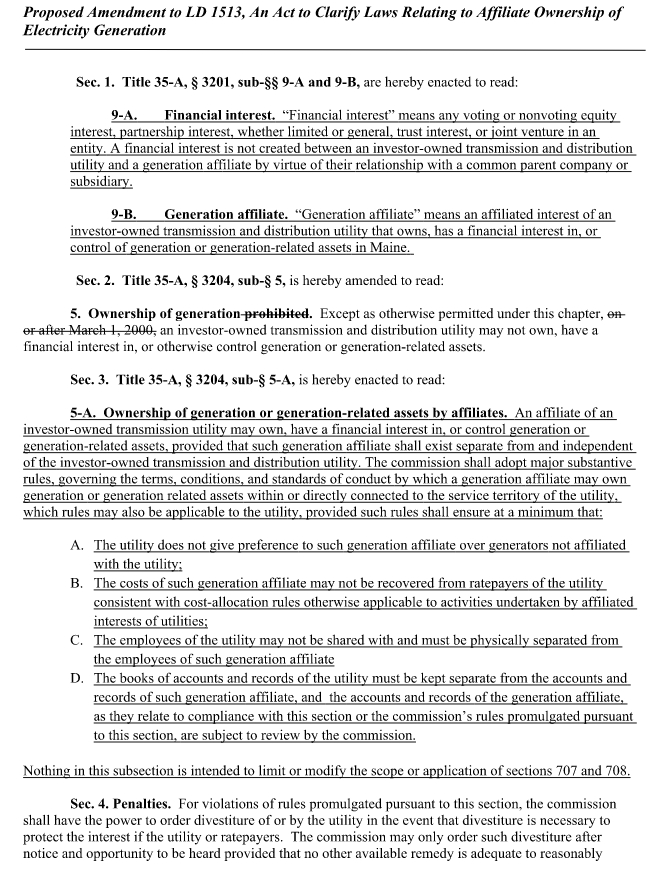 Relationship of these two projects as compared to the current
Wind Farm Locations. 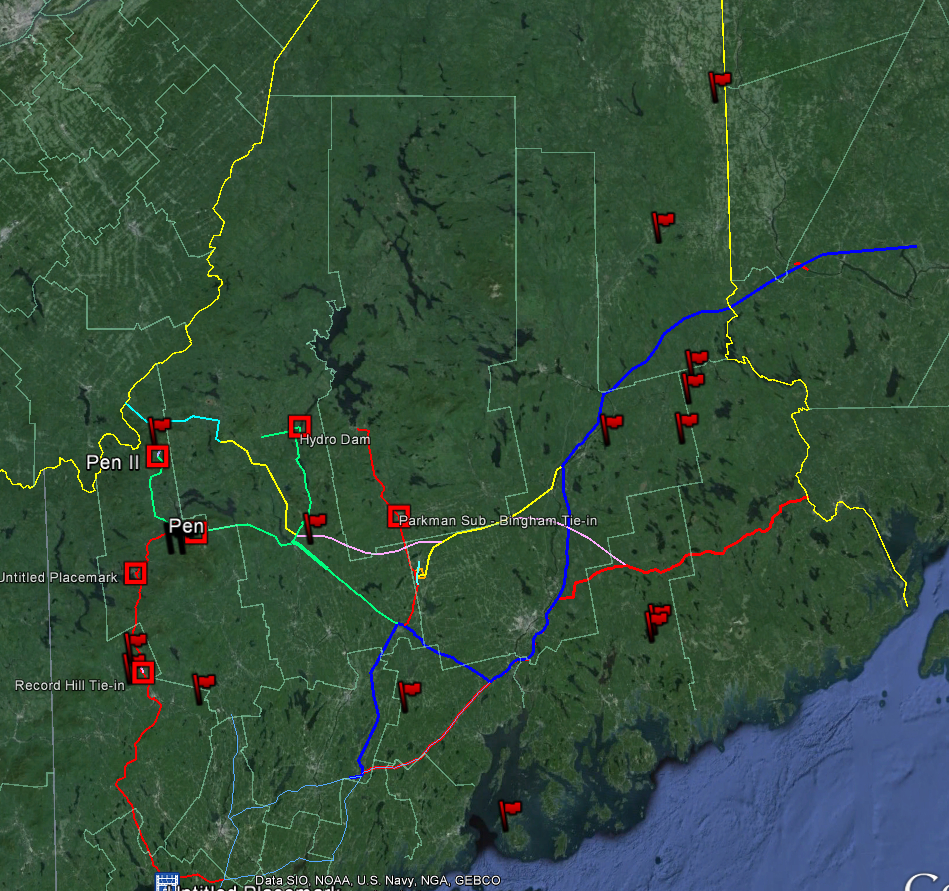 The Green in this image is the existing ROW's with the junction being Wyman Dam. The Yellow is seemingly a "NEW" cutting of a ROW with the light blue probably a future expansion. Note the path and some key Mountains within striking distance. Also note the distance on the westerly existing ROW that was extended from the Rangely lakes northward to collect only the power from the Wind Farm. This is the CMP  build out for the future, which if allowed given the passage of a few key bills such as LD 1513 (more probably) would allow them to generate with future Wind farms. What other reason would this Yellow and Blue lined ROW be needed in Maine's Future? There are NO Canadian connections at the border near Keen Siding for any power to come through Maine to Southern New England. 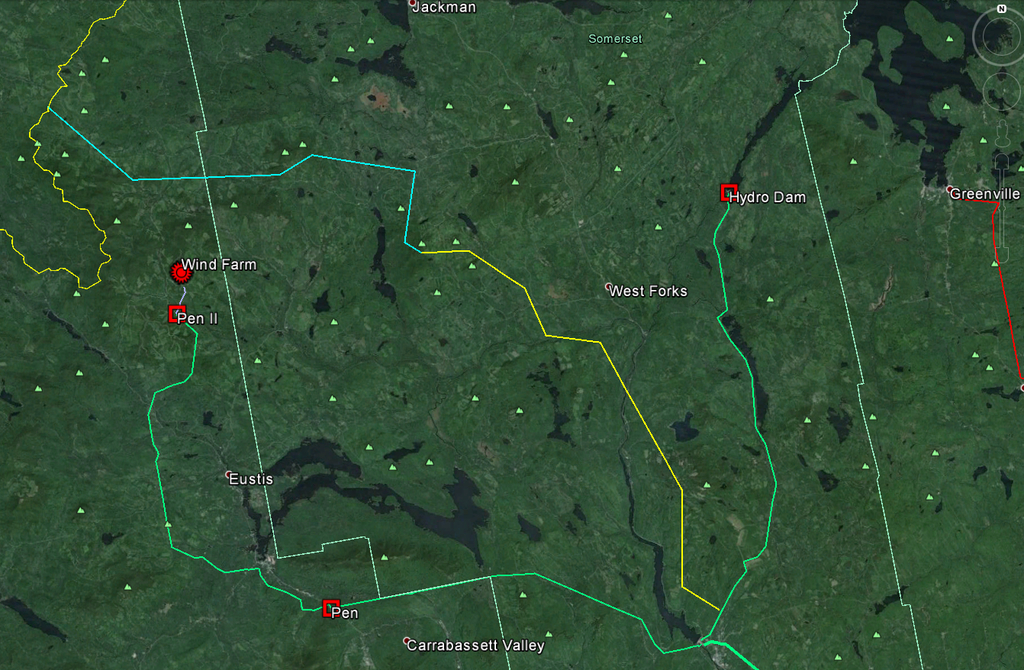 History of EDF and its consortium-

U.S. Renewable Energy Group “This wind farm project came about thanks to the openness of the United States for investments in the field of renewable energy,” said John Lin, the chief operating officer of China’s Shenyang Power Group.

Construction of the $1.5 billion wind farm would be funded largely by Chinese financiers, with an assist from the United States government in the form of loan guarantees and grants from the federal stimulus package.

“This wind farm project came about thanks to the openness of the United States for investments in the field of renewable energy,” said John Lin, the chief operating officer of Shenyang Power Group, an industrial group in China focused on renewable energy projects.

The project would mark the first instance of a Chinese manufacturer exporting wind turbines to the United States market, according to the vice mayor of the city of Shenyang, Yang Yazhou, who spoke at a news conference announcing the joint venture.

The farm is to be built on 36,000 acres in western Texas — an exact location was not specified — and will use 240 2.5-megawatt turbines manufactured in China. Construction is expected to begin next March. The project will create an estimated 300 temporary construction jobs, and 30 permanent jobs.

The use of Chinese turbines in a major American wind project could add fuel to concerns over China’s protectionist policies in renewable energy manufacturing. China is already a dominant player in solar panel manufacturing, and exports 95 percent of its solar components to the United States and Europe.

According to a recent article in The New York Times by Keith Bradsher, China required 80 percent of the materials used to construct its first solar power plant earlier this year come from China.

Scott Rowland: My education includes a Bachelor of Science, Mechanical
16 Engineering, MIT, 1989 and a Master of Science, Civil Engineering, University of
17 Texas at Austin, 1992. My experience includes serving as owner and manager of a
18 private contracting firm in San Antonio, TX and as a Project Manager with Texas
19 Wind Power Company, a privately held wind power services company based in
20 Austin, Texas and affiliated with Cielo Wind Power Company. During both
21 employment tenures, I have participated in multiple wind power projects in Texas
22 and surrounding states totaling approximately 245 MW. During my employment by
23 UPC, I have managed engineering activities related to UPC’s development portfolio
Docket No. _______
Prefiled Direct Testimony of Cowan, Rowland, and Vavrik
February 21, 2006
Page 3 of 67

Eric Tuttle, Regarding Bangor Hydro's 20 largest purchasers of power in 2012, there are three wind companies listed. What are they using that power for?

Wyman was supposed to have been at capacity and would not allow for the Bingham Project to utilize that ROW, now they propose to expand it up to Wyman after having destroyed acres of land for the Parkman run which ties in on the same run that will be upgraded coming from the Aroostook proposed route. 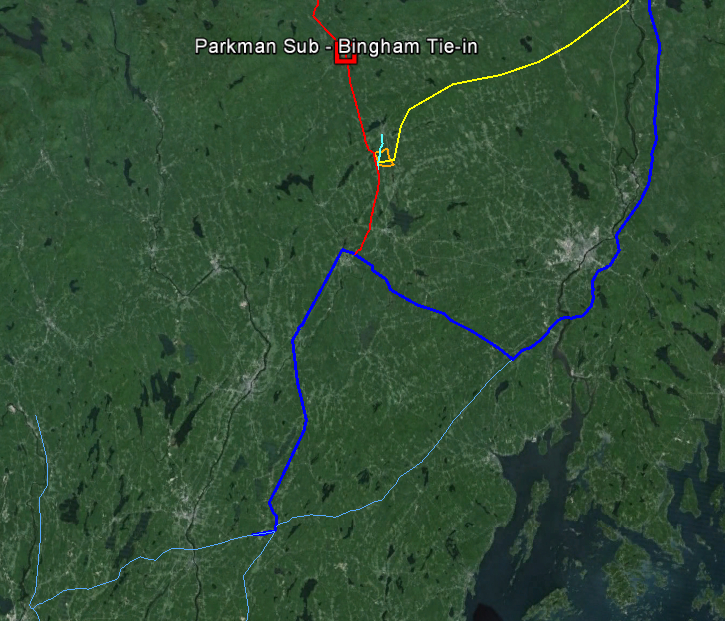