Joe Biden on Thursday shunned U.S. gas and oil leaders when they met with Energy Secretary Jennifer Granholm, instead issuing an announcement of a partnership between the federal government and states to push for offshore wind infrastructure.

Biden has been slamming the oil and gas industry, blaming them for underproducing and profiteering even as the president, since Day One in office, has done everything possible to hamper domestic production of fossil fuels.

More at the following weblink:

It appears that the great Richard Gage was forced to leave the 9/11 organization he founded because he made a statement(s) questioning the Covid narrative, which was off-limits because the organization (also great) was created solely to challenge the official 9/11 narrative (great lies). It seems that Gage's comments on Covid may have had something to do with Spike Lee pulling the 9/11 segment from his HBO special which aired on 9/11/21. This is sad but the good news is that Richard Gage has now created a new organization to challenge the 9/11 official narrative, and perhaps touch upon some of the other terrible things that demand scrutiny, such as Covid and the 2020 election steal.

Please read up on Mr. Gage at the following weblinks:

Richard Gage: Why I Am Going Solo

“Our study found that the fires in WTC 7 could not have caused the observed collapse,” said Professor Leroy Hulsey, the study’s principal investigator. “The only way it could have fallen in the observed manner is by the near-simultaneous failure of every column.”

Weblink to University of Alaska study:

(In short, this third building we were barely told of that was NOT hit by a plane came down in a controlled demolition with pre-planted explosives)

Because you know something is wrong.
Helping truth seekers understand how the world really works.
RED PILL EXPO - July 9 & 10, 2022
One of the speakers is Richard Gage.
Register to attend or livestream
https://redpilluniversity.org/expo-homepage
(I am not familiar with this organization, but I have bookmarked their site)

The Gas Inflation Crisis Is Far From Over – Where Will Prices Finally Stop?
https://www.zerohedge.com/economics/gas-inflation-crisis-far-over-w... 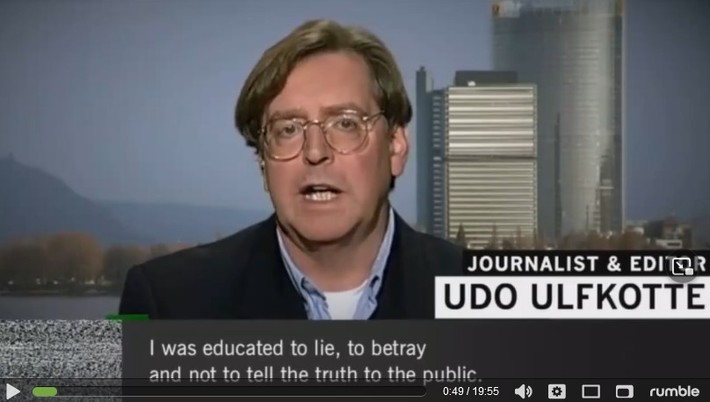 The English translation of German journalist Udo Ulfkotte’s best-selling book, GekaufteJournalisten (Bought Journalists)appears to have been suppressed throughout NorthAmerica and Europe.

Udo Ulfkotte was a prominent European journalist, social scientist, and immigration reform activist, writing Gekaufte Journalisten and becoming one of the most significant media industry and deep state whistleblowers in recent history.

Ulfkotte’s insider knowledge of the relationship between mainstream media and the intelligence community has special relevance in terms of informing the CIA’s antipathy toward Wikileaks.

Read the entire article at the following weblink:

We can take America back and we must

Thankfully a huge number of Americans have woken up to the tyranny, but the mainstream media are thoroughly controlled and work overtime trying to frame said Americans as a small minority. In fact, there are far more of us than they want us to believe. Job number one is fair elections. In reality Trump won by millions of votes but controlled computerized voting machines as well as the illegal ballot stuffing as shown in 2000 Mules, stole the election from the American people and a puppet government was installed. This puppet government is not here for the good of America but rather its destruction. For those who do not believe this, please do your homework.