Stewardship of our natural world is certainly a good thing. However, a huge divide exists between urban centers divorced from the natural world, and a rural population who daily live in it. The urban population uses virtue signaling through environmental mandates that sound good, but don’t actually work. Meanwhile, rural folks have to live with the visual impacts of mountain top wind turbines that kill birds and bats by the thousands, forests torn by transmission lines, and the economic impact of lost jobs and tourism.

It is no wonder a target of 3000 megawatts of wind power by 2020 will be missed by 70 percent because of local opposition to having more turbines forced on communities who don’t want them. Governor LePage’s moratorium on new wind projects was the right decision.

Where would electricity come from, if nuclear plants were shut down?

Wind and solar, you say?

Where would electricity come from, if New England has 5 to 7 day wind/solar lulls which can happen throughout the year. See URLs

Texas has the following sources of electricity, %

As more wind is generated, Texas relies more and more on its gas turbines plants to balance variable wind generation, and relies less and less on coal plants for that service. 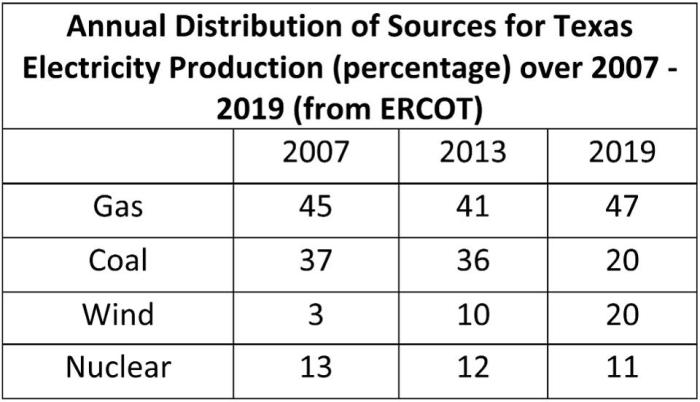 Texas needs to have about 10% more generating capacity, MW, in excess of peak demand to cover scheduled and unscheduled outages of traditional generators.

Germany, Denmark, and Ireland, with high wind electricity percentages, have strong connections to nearby grids.

Germany, Denmark, and Ireland borrow generating capacity from nearby grids, when their wind and solar generation is minimal.

Texas cannot borrow generating capacity from nearby grids when its wind and solar generation is minimal, because it has weak connections to nearby grids.

Texas needs about 15 to 20 percent more generating capacity in excess of peak demand to cover the hours of a year when insufficient wind and solar electricity is generated.

New England, with about 50% of its generation from gas, and weak connections to nearby grids, would have to rely more and more on its gas turbine plants to balance more and more wind generation in future years, i.e., low-cost gas generation cannot be reduced.

"...require local approval of onshore wind and ban offshore wind with visible turbines..."  So many onshore rural towns have already been torn asunder by the wind industry, and we're suppose to embrace more of that "onshore/offshore" discrimination, where visible offshore wind turbines are banned?  How about following a science based energy policy?  If urban dwellers hadn't been so brainwashed by the media, even people who never stood in a forest or climbed a mountain would understand the economic and environmental impacts of industrial wind.

Comment by Donna Amrita Davidge on January 16, 2020 at 2:46pm
Just more tragedy and travesty from the frigging wind industry...and the awful politicians who support it.. can’t someone ever repeal baldacci’s awful 2008 law?

Comment by Dan McKay on January 16, 2020 at 12:38pm
FROM THE MAINE PUC WHO WAS DIRECTED BY THE HOUSE AND SENATE MEMBERS OF YOUR GOVERNMENT TO SOLICIT CONTRACTS FOR RENEWABLE ENERGY :
Energy Resource obligations:  Electricity supply contracts are intended to facilitate the development of electric power generating plants and/or provide electric rate stability benefits.  These contracts are also designed to provide benefits in the form of lower wholesale regional wholesale electricity costs and to encourage renewable energy development. This category includes both legacy stranded costs and post-restructuring long-term contract costs/benefits.
INCREASED RATEPAYER COSTS ASSOCIATED WITH ELECTRIC SUPPLY CONTRACTS :
$14.7 million dollars for 2019
Every contract cost Maine Ratepayers money, all 8 of them