Households in the Northeast Brace for Costly Heating Bills

Households in the Northeast Brace for Costly Heating Bills

According to the Energy Information Administration (EIA), U.S. heating oil prices were 65 percent higher this October than they were in October of last year. Residential heating oil prices on average nationally rose to an annual high of $5.90 per gallon on November 7, 2022, because of tight inventories, low imports, and limited production capacity but fell to $5.79 per gallon on November 14—still 70 percent higher than a year ago. Only 4.1 percent of U.S. households use oil as their primary heating fuel, but in the Northeast, the percentage is much higher – 33 percent.

According to Weekly Petroleum Status Report, as of November 11, Northeast distillate fuel inventories totaled 15.2 million barrels, 44 percent less than for the same week last year. Further, from January through August 2022, East Coast distillate imports were 38 percent lower compared with the same period in 2021. Although East Coast refineries are producing at near full capacity, East Coast refining capacity has fallen in recent years.

In 2019, for example, the East Coast region’s largest refinery, the Philadelphia Energy Solutions (PES) refinery, was damaged by a fire and shut down permanently. PES was the target of left-leaning groups and media claiming it represented a threat to “environmental justice,” despite its century of operations at the site.  Now Americans will suffer much higher heating costs because of its closure. “Environmental justice” is a centerpiece of President Biden’s campaign against oil, gas and coal, but closing this refinery will affect poor people hard financially. 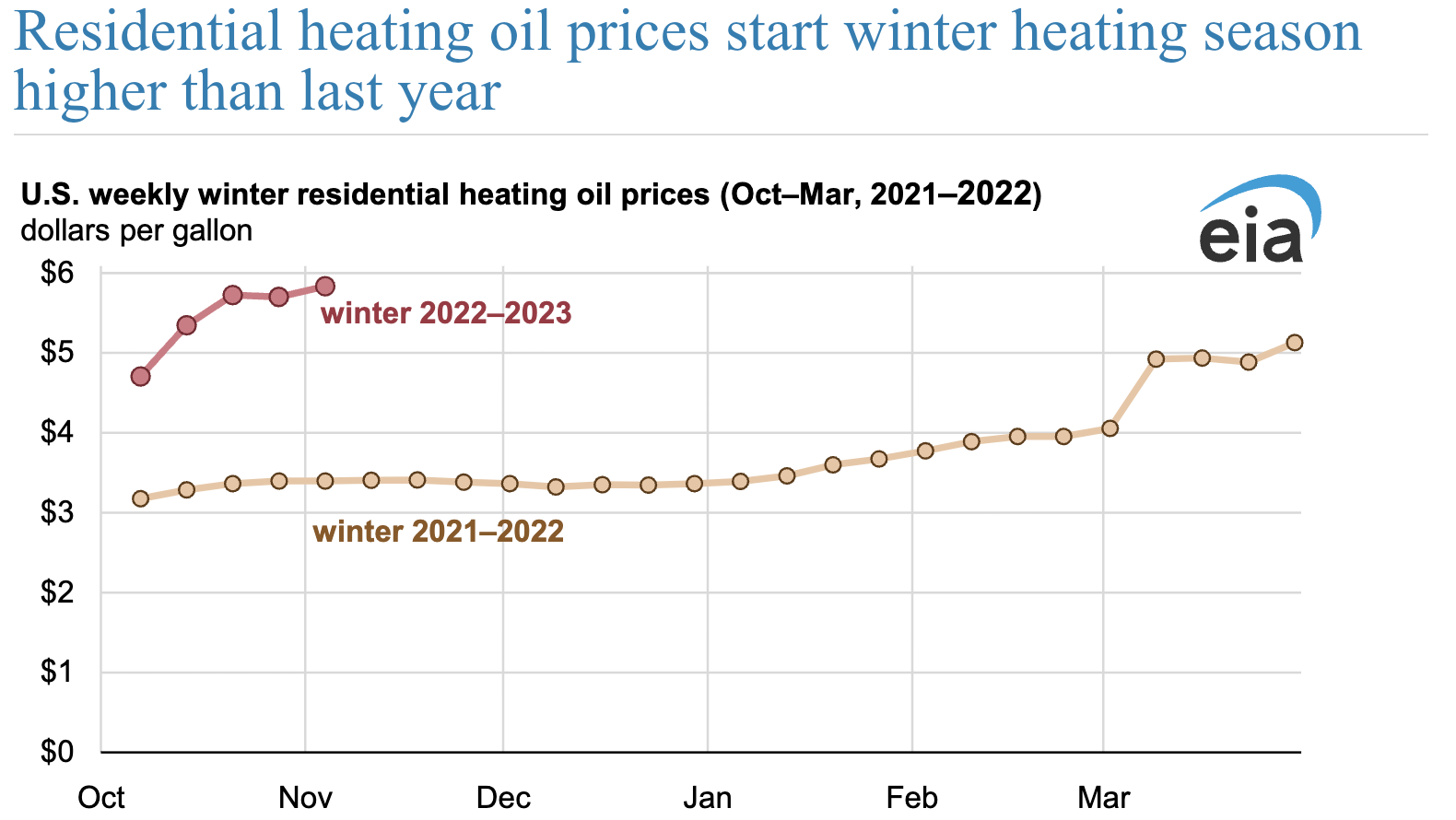 
The winter heating season extends for 6 months–from October 1 through the end of March—a long time to be hit with high heating costs. In EIA’s November update of the Winter Fuels Outlook, households that use heating oil as their primary source of heating fuel are expected to spend 45 percent more on average for heating this winter compared with last winter because of higher retail heating oil prices and higher expected consumption. The average price is expected to be $5.14 per gallon—32 percent higher than last year. Of the states surveyed, residential heating oil prices ranged from $4.28 per gallon in Nebraska and $6.13 per gallon in Delaware on No....  New York and New England have already taken to rationing fuel to consumers in light of the shortages.

Heating oil is not the only fuel with higher prices this winter. On average, wholesale natural gas prices are expected to be higher this winter, leading to higher prices for both natural gas and electricity in the retail market. Natural gas prices increased earlier this year because consumption growth outpaced production growth in the first half of 2022. Demand growth resulted from both increased domestic consumption because natural gas to coal switching in the generating sector was more limited due to additional coal plant retirements and increased liquefied natural gas (LNG) exports, as Europe was looking to the United States to help shore up its gas inventories.  Biden has been pushing for more energy exports despite his continuing assaults on additional energy production here. Europe became overly dependent upon Russian natural gas while refusing to develop their own resources by banning horizontal drilling and hydraulic fracturing as some have urged in the United States.

The winter fuels outlook is for higher energy prices for most fuels and higher bills for all fuels this winter compared to last winter. This winter is expected to be colder than last winter which increases energy demand and with it, energy expenditures. However, since the United States is endowed with energy resources, particularly coal, natural gas and oil, the price increases of the magnitude forecast by EIA are unnecessary and reflect the consistently anti-fossil fuel agenda of the Biden Administration. President Biden has limited domestic production of oil and natural gas since taking office on January 20, 2021, and made producing, processing and transporting it more difficult. Consumers will see it in their utility bills this winter.

Pet Ownership is Now Under Attack by Unhinged Climate Extremists – Says Dogs and Cats are Part of the Climate Problem
https://www.thegatewaypundit.com/2022/11/pet-ownership-now-attack-u...