Once again, an inanimate Tesla has burst into flames.

The latest incident comes from Upper Dublin, Pennsylvania, where a charging Tesla in the driveway of a home reportedly caught fire, resulting in what could be a "total loss" of the home it was parked at.

The Tesla was parked in a driveway and caught fire at about 10:30pm, the report from Patch says. ABC also posted video of the incident

The Fort Washington fire department was dispatched to the scene at about 10:19 after a report of a vehicle on fire. When they arrived at the scene, fire was "eminating from the rear of the Tesla" and had made its way to the house and the attached garage, the report says. 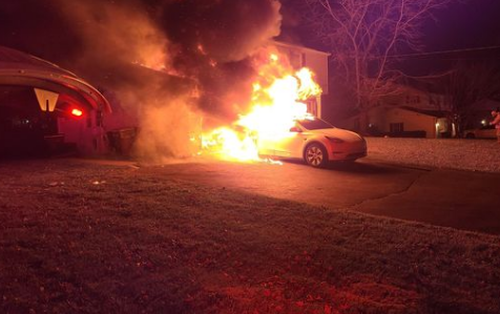 There was "extensive damage" to the vehicle and the house. Photos posted to the Fort Washington fire department's website show a car engulfed in flames.

CBS later reported that the home was a "total loss" following the incident.

It's the second incident of a Tesla catching fire in the Philadelphia suburbs this year. This summer, a Model S Plaid Tesla caught fire with the driver at the wheel. The driver's lawyer claimed the vehicle "burst into flames while the owner was driving" it.

In other news, the NHTSA has yet to act on a wide ranging investigation it is performing into hundreds of thousands of Tesla vehicles, while the NTSB continues to warn consumers about safety issues related to the vehicles' autonomous driving features.

He had been driving back and forth from Thetford, VT, to Montpelier, VT, with his EV, about 100 miles via I-89

He had parked his 2019 Chevy Bolt on the driveway, throughout the winter, per GM recall of Chevy Bolts

He had plugged his EV into a 240-volt charger.

Charging over such a wide range is detrimental for the battery. However, it is required for “range-driving”, i.e., making long trips. See Note

NOTE: Range-driving is not recommended, except on rare occasions, as it would 1) pre-maturely age/damage the battery, 2) reduce range sooner, 3) increase charging loss, and 4) increase kWh/mile.

Charging at 32F or less

Li-ions would plate out on the anode each time when charging, especially when such charging occurred at battery temperatures of 32F or less.

Here is an excellent explanation regarding charging at 32F or less.

Fire in Driveway: Firefighters were called to Briglin’s house on Tucker Hill Road, around 9 AM Thursday.

2) It was likely due to an “electrical failure”. See Note

NOTE: Actually, it likely was one or more battery cells shorting out, which creates heat, which burns nearby items, which creates a fire that is very hard to extinguish. See Appendix

Owners were advised not to charge them in a garage, and not to leave them unattended while charging, which may take up to 8 hours; what a nuisance!

I wonder what could happen during rush hour traffic, or in a parking garage, or at a shopping mall, etc.

Rep. Briglin heeded the GM recall by not charging in his garage. See URLs

- EV batteries should be charged from 20 to 80%, to achieve minimal degradation and long life, plus the charging loss is minimal in that range

1) Uses more kWh AC from the wall outlet per kWh DC charged into the battery, and

2) Is detrimental to the battery.

3) Requires additional kWh for cooling the battery while charging.

Australian MP Calls on Free Citizens to Rise Up Against Covid Tyranny
https://www.infowars.com/posts/powerful-australian-mp-calls-on-free...