WHEN FICTION HAS MORE TRUTH THAN 'NON-FICTION'

For those who found Mike Bond's Killing Maine spot on, if you haven't read it, his earlier novel Saving Paradise about the wind industry's attack on the glorious state of Hawaii, is available on Kindle for 99 cents at the present time. 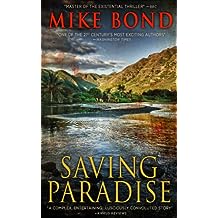 A couple of browsing results for Hawaii and wind turbines: A breathtaking sight awaits those who travel to the southernmost tip of Hawaii’s stunningly beautiful Big Island, though it’s not in any guidebook. On a 100-acre site, where cattle wander past broken ‘Keep Out’ signs, stand the rusting skeletons of scores of wind turbines.

Just a short walk from where endangered monk seals and Hawksbill turtles can be found on an unspoilt sandy beach, a technology that is supposed to be about saving the environment is instead ruining it.

In other parts of the U.S., working wind turbines are killing hundreds of thousands of birds and bats each year, but here the wildlife can perch on the motionless steel blades.

If any spot was tailor-made for a wind farm it would surely be here. The gales are so strong and relentless on the tip of South Point that trees grow almost horizontally.

Yet the 27-year-old Kamaoa Wind Farm remains a relic of the boom and inglorious bust of America’s so-called ‘wind rush’, the world’s first major experiment in wind energy.

A Hawaiian island is one step closer to getting 100 percent of its electricity from renewable sources.

Unveiled on Wednesday, the Kapaia project features 54,000 solar panels. But that's not what makes it so unique.

Perhaps most importantly, it includes over 270 of Tesla's Powerpack batteries, which will store some of the solar power created during the day and supply those electrons to the grid in the evening.

The project — the largest of its kind — is expected to displace about 1.6 million gallons of diesel per year, Tesla said in an email.

Tesla's Powerpack batteries in Kauai were made at its $5 billion Gigafactory in Nevada.