Thank you very much for our conversation. I’ve included an attachment of LUPC’s proposed new locations for development. As I mentioned, LUPC will host public information meetings in Bingham and Millinocket. The Bingham meeting is on April 2 at 6:00 p.m. at the Bingham Town Office. LUPC’s April 11 meeting (Spectacular Event Center Bangor) will offer an opportunity for public comment on the proposal.

Please feel free to send me any questions, and thank you again for your time. 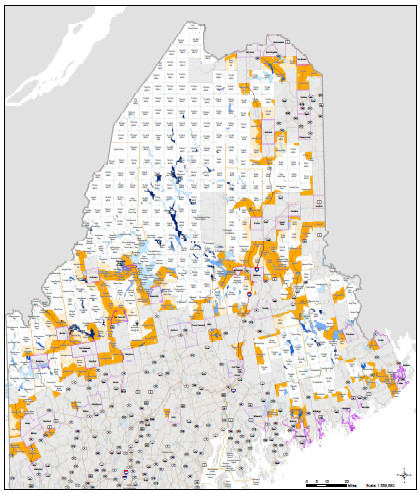 Yes. If the proposal is accepted, then LUPC would rezone to allow for commercial, industrial, retail, and residential development in the gold zones. The striped zones would allow for residential development. One thing to keep in mind is that this map doesn’t include conserved land or conservation easement land, which would take some gold areas off the map. LUPC hasn’t made this map publicly available.

Thanks for your question,

THANK YOU FOR FOREWARDING THIS INFORMATION - I WIIL/SHALL MAKE MY  CONCERNS  KNOWN to the LUPC !!

THE LUPC  IS GOING TO DESTROY  THE RIVERS ,STREAMS,BROKS and LAKES - SOME OF THESE  LAKES ARE PRIME WILDLIFE HABITAT AREAS . Many of the  RIVERS  are  TROPHY FISHING STREAMS  and in addition they  provide potable water for existing  community's . WHAT ARE THEY THINKING ! MANY Of the LAKES are water supply's for villages . CAN The INFRASTRUCTURE In any of these areas  handle the additional  LOAD that is going to be placed upon them? DOES THE LUPC planning to  provide  funding for the additional SCHOOLS that will be Required? Does the LUPC-Plan on providing  the additional  FIRE & Police that WILL Be Necessary  to sustain the EVER Expanding  Population  and personal property ? ARE THE SOILS suitable to sustain  SEPTIC SYSTEMS - AWAY from the RIVERS,STREAMS & LAKES ? IS there  sufficient POTABLE Water  Available - CRUCIAL  for  RESIDENTIAL ?SEASONAL?COMMERCIAL EXPANSION? WHERE  is the  POWER going to come from to provide ENERGY To HOMES & Business?

BEFORE THE LUPC decides how these  REGIONS  Are to be ZONED- All of these Questions Have to answered   AND THERE ARE MANY MORE CONSIDERATIONS  that have to be addressed !! 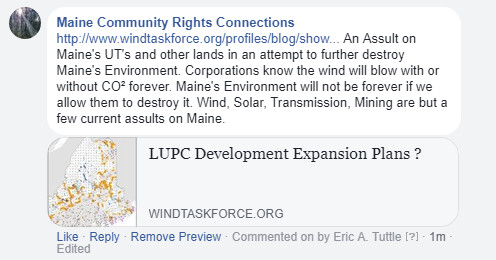 I am 100%  against any future  WIND DEVELOPMENT  PLANNING in  the State of MAINE !

IT Is Literally destroying This  STATES GEOLOGY and  MORE IMPORTANTLY its ENVIRONMENT..

THE STATE OF MAINE IS LITERALLY BEING USED  as a power generator for  the STATES that lie to the South of us ! THE only  VERY TEMPORARY advantage- is the very few  very short lived construction  Jobs it provides ! WIND Power has done absolutely  nothing to  lower the  POWER  (ELECTRICITY)  Rates to ANY Of its  CITIZENS. Wind Power has done absolutely NOTHING  to reduce this states dependence on Fossil Fuels. WHY DOES THE STATE OF MAINE  HAVE TO BE DESTROYED  to PROVIDE POWER  for other STATES ? WHY CAN'T  THE STATES THat NEED THE POWER -GENERATE THE POWER IN THEIR OWN STATES ?

Note the Gold Colored areas along the western shores of Moosehead Lake, all within Somerset County. Proposed Wind Development Areas that are being fought.

Then the Area going further west then South along the Western Side of the Kennebec, where they once proposed as many as 5 wind farms, which I believe escaped momentarily, since this proposal may be once again trying to allow that zone under a different guise of operation. Re-Zoning, rather than Expedited.

The following tells the story of how a map came to harm Mainers with "expedited wind". This is from the Maine Center for Public Interest Reporting.

After proposing major changes to state law that would speed up the review of wind power projects, Gov. John Baldacci’s wind power task force members went one step further: They made a map. Without the map, the law would just be a set of rules. The map was essential because it showed where wind turbines could go to get fast-track consideration.

The map designated all the organized towns and about a third of the unorganized territory as the state’s “expedited wind zone” where that speedy consideration of projects would take place. The task force also proposed to allow the Land Use Regulation Commission (LURC) to expand the areas if applicants met certain standards.

How that map got drawn is not clear from the official record of the task force’s meetings. That’s because summaries for the last two meetings don’t exist, says task force chair Alec Giffen’s secretary, Rondi Doiron.

“Everyone was working straight out on getting the report done and no one had time to get the summaries done,” Doiron wrote in an email to the Maine Center for Public Interest Reporting.

But Giffen and others freely describe the map’s genesis: First, Giffen consulted with the developers’ representatives one-by-one, as they were loathe to share proprietary information with competitors.

Then he went to the environmental groups and asked what areas they wanted to protect. Then he came up with a proposed map designating expedited wind development areas.

“I integrated, based on what I knew about what areas were important for what kinds of uses,” said Giffen, “presented it to the task force and got concurrence that the way in which it was outlined made sense.”

Others describe the map-drawing process as a last-minute rush to get the task force’s report done in time for legislators to consider as they neared the end of a short session.

“There was a lot of ‘Here, here, here and here’ and ‘No, no, no and no,” during the map debate, said task force member Rep. Stacey Fitts, R-Pittsfield. “It changed several times.” Maine Audubon’s Jody Jones described the process as “I want this in, I want this out.” Whatever the process looked and sounded like is lost to the public record because no minutes were taken or recorded.

“There’s no requirement that they record their meetings or produce minutes,” she says. “What smells particularly about this is that there are some summaries and not others. That’s a real eyebrow raiser. You’d think a governor’s task force would have the ability to keep minutes of its proceedings.”

Who is deciding what here and what are they basing their decisions on? I know after the expedited wind map was drawn up, none of the Baldacci wind task force could explain how the decisions were made. No record was kept. Is that the case here? Why does NRCM have documents that have not been made public?

Note the overlay of both the LUPC proposed areas and Conservation Lands.
I have to wonder How Many the NRCM will Swap or allow to be Swapped for new Conservation lands.
Maine it seems is not much more than a bargaining chip for the glorification of the Few wealthy donors at the expense of the Many Maine Citizens and its life-sustaining Natural Resources.