Blame a perfect storm of bad government policies, timing and weather. Coal and nuclear are the most reliable sources of power. But competition from heavily subsidized wind power and inexpensive natural gas, combined with stricter emissions regulation, has caused coal’s share of Texas’s electricity to plunge by more than half in a decade to 18%. Wind’s share has tripled to about 25% since 2010 and accounted for 42% of power last week before the freeze set in. About half of Texans rely on electric pumps for heating, which liberals want to mandate everywhere. But the pumps use a lot of power in frigid weather. So while wind turbines were freezing, demand for power was surging.

This begs the question, why would investors build new intermittent sources of generation in Texas like wind and solar that do not show up when needed? And that cannot take advantage of the higher prices during times like these?

The sole cause for this, that in normal market circumstances would be an obvious malinvestment, is renewable energy subsidies.

On the other hand, investors have spurned investment in reliable traditional generation sources like coal and natural gas. Coal, of course, has been run out of business by the U.S. Environmental Protection Agency. Investors are spurning natural gas, however, simply from an economic perspective. Without the massive subsidies offered to wind and solar, new natural gas plants cannot compete.

Because of market distortions created by renewable subsidies, when Texas ran low on electricity Monday night, the grid operator had nowhere to turn. Reliable natural gas plants that could have shouldered much–if not all–of the heavy load were nonexistent. Because they had not been built, thanks to the malinvestment in renewables.

Brainwashed the DocuMovie Part One - Watch and Share With All (FREE)

Twelve Historically Documented Tactics Actively Used By The Communists To Capture The Minds of Americans & Collapse The United States From Within
https://www.worldviewweekend.com/brainwashed-documovie-part-one

29 YEARS AGO, Soviet defector and KGB operative Yuri Bezmenov, specializing in the fields of Marxist-Leninist propaganda and ideological subversion; warned us about the silent war being waged against America as part of a long term plan to take over and destroy the American system and way of life. Watch this clip in AMAZEMENT as you realize he is describing EXACTLY what's happening in America today,

Comment by Jim Wiegand on February 22, 2021 at 7:35pm
Why would this mayor allow the bad guys to profit from the people for this utility disaster?
Actually it would be really stupid for anyone or even the state to pay these ridiculous bills. I saw on the news today that one person had his credit card charged for about $17000.    A Charge Back is in order and if that doesn't work, he should tear up the card and walk away.
I had someone that had me CC info rip me off last summer.  I called the credit card people to do a charge back and when they filed the case, I told them I will never pay this, ever. And if they side with the crooks I was just going to rip up the card. Fortunately they made the right call.
https://www.bbc.com/news/world-us-canada-56147311

Here is an article in progress.

The output of every electricity plant, in every state, is monitored/recorded by the regional grid operator, such as ISO-NE

The electricity drawn from a regional grid by a utility, such a GMP drawing from the NE grid, is monitored/recorded by the grid operator.

All that data is forwarded to the Energy Information Administration, EIA, a department within the US Department of Energy.

Every utility has power purchase agreements, PPAs, with owners of electricity power plants.

The New York Times of February 20, 2021 displayed a graph of Texas electricity production by source, just before the major winter storm, based on data from the EIA.

The output became about 29,000 MW about one day later, a 33% reduction (largely due to freeze-ups), then it went up and down at an average of about 29,000 MW, to counteract changes of other sources.

Nuclear plant output was about 4,000 MW.

The output became about 3,000 MW about one day later (largely due to freeze-ups), a 25% reduction

Solar plant output was near zero.

The output increased to 3,000 MW at midday, then to near-zero again., etc.

The image shows the installed capacity of each major source, MW. 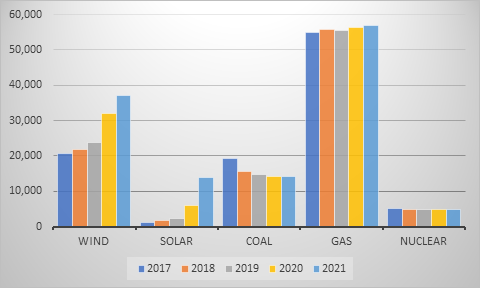 The image shows the subsidies for wind and solar.

As standard equipment, the wind turbines in Germany, the Netherlands, Norway, Sweden, etc., have heaters for the rotors and blades, and for the big box, aka nacelle, on the top of the tower. To avoid freeze-ups and dangerous ice throws.

Texas needs to freeze-proof its power plants and wind turbines, to ensure greater reliability of service.

The image is of Bernie Sanders in Texas. “High and dry! What, me worry? I used to be a poor hippie, but now I am a multi-millionaire, with 3 houses and a tax-free foundation.” 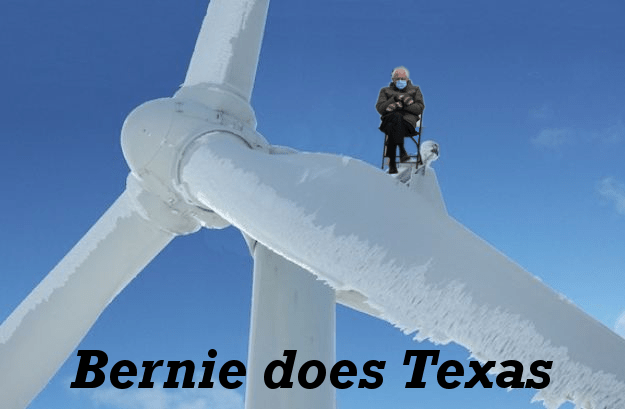